Brooks and Saucony have been making running shoes for more than 100 years, which gives them the experience and expertise to guarantee you a comfortable ride on your next run. Both companies saw an opportunity to create a versatile shoe for neutral runners that want to balance speed and cushioning, which is why they created the Ghost and the Kinvara respectively. But having two excellent options from two reputable running shoe brands makes for a tough decision about which is the best shoe for you! Runners have been debating between a couple Brooks and Saucony shoes for decades, so don’t feel badly about your struggle to pick the running shoe for you. Check out the pros and cons of the Brooks Ghost and Saucony Kinvara below to help with your decision! 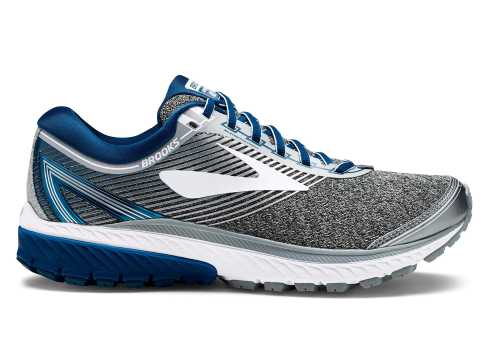 Pros Brooks running shoe purists love how the Ghost gives them a lightweight feel with the cushioning that they need on the roads. The Ghost is a versatile shoe that will be great for your up-tempo runs as well as your weekend long run. This Brooks running gives runners a bouncy feel that makes it easy to pick up the pace on their faster training days, but it still has enough cushioning to protect your feet on longer runs. The newest version of the Brooks Ghost is designed to provide an even more comfortable fit with its 3D-printed upper that will fit your foot like a glove from the first step. Cons The Brooks Ghost gives runners a fast and responsive feel, but it can still feel a bit stiff through the midsole compared to other performance cushion running shoes. Runners that are looking for a flexible training shoe may not like the fact that when compared to the Saucony Kinvara, the midsole of the Brooks Ghost will feel a bit stiffer. The Kinvara is also about 2 ounces lighter than the Brooks Ghost, so if you’re looking for a lighter weight shoe, the Kinvara has an advantage. Additionally, if you’re a runner that prefers a shoe with a lot of cushioning and a super-soft feel, you may not like the more responsive feel that the Brooks Ghost provides. 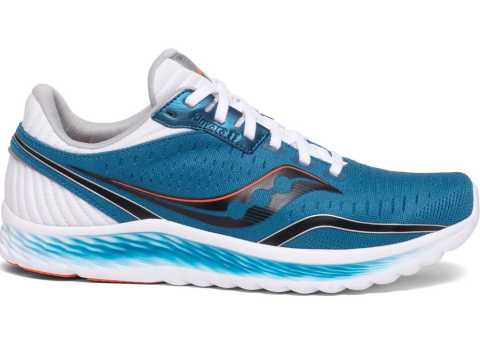 Pros The Saucony Kinvara is an incredibly versatile shoe that will be a great fit for any type of running you can throw at it – from hill sprints for speed development to your weekend long run. The Kinvara weighs less than 8 ounces in a Men’s size 9 and has a flexible midsole, which gives it an exceptionally responsive feel for your faster training days. Despite the Kinvara’s light weight design, it still gives runners a healthy dose of cushioning to protect their feet from the roads on longer runs. Saucony has also added its FORMFIT technology to deliver custom fit for every type of foot. Whether you’re planning for a short tempo run or a long run to prepare for a marathon, the Kinvara is an excellent option. Cons The Saucony Kinvara is definitely a lightweight shoe, so you’ll notice the performance design from the first step. This is great for neutral runners that are accustomed to a relatively minimal design, but runners that want a running shoe with more cushioning or support may want to look elsewhere. The Kinvara is a bit more minimal than the Brooks Ghost, and while you may not notice the 2-ounce weight differential, you’ll see that the Kinvara has a more flexible midsole that flexes with each stride. Runners that prefer a shoe with a bit more stability and cushion between their feet and the roads may prefer the Brooks Ghost.

Conclusion Saucony and Brooks have been experts in the running shoe world for decades, so you can trust that both brands know how to make a lightweight neutral trainer. The Kinvara and the Ghost have been mainstays for both companies because they’re incredibly versatile shoes that can stand up to speed training and long runs without skipping a beat. When you’re making your decision between the two, it really comes down to weight and flexibility. If you prefer a running shoe with a solid midsole that doesn’t sacrifice on responsiveness, the Brooks Ghost is a great option for you. However, if you’re looking for a shoe that has an extra low weight and a flexible midsole that lets you feel the ground, the Saucony Kinvara is your best bet. Either way, you can find the Saucony or Brooks running shoe for you here at ShoeKicker!