Hoka One One Clifton vs. Brooks Beast

In the world of running shoes, there’s a long-running debate about whether a minimalist or maximalist approach is better for preventing injury and improving performance. While each side has its proponents and detractors, recent research suggests that maximalist shoes (those with plenty of cushioning underfoot) are a strong choice for runners prone to foot injuries. Two of the most popular cushioned shoes are the Brooks Beast and the Hoka One One Clifton. While both are popular with long distance runners looking for a comfortable ride, the two shoes do have significant differences. Read on to learn which one is best for you. 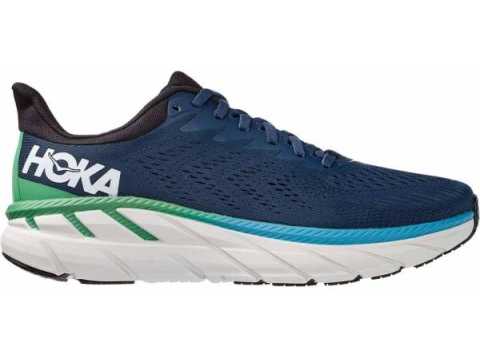 Pros: Hoka One One, founded in 2009, has been known for its distinctive thick soles from the start, and the Clifton fits neatly in that mold. Its unique appearance comes from the use of a deep layer of full-compression EVA foam, which provides comfortable, cushioned ride. Its Meta-Rocker design technology and beveled heel promote a midfoot strike and a smooth stride.

That foam certainly leads to a slower ride than a racing flat, but it does have some bounce to it. It’s a solid option for mid to long-distance runners who aren’t looking to podium and want some extra support on the road—and it’s an even better long-distance trainer. Despite the cushion, the men’s shoe comes in at a reasonable 8.7 ounces.

Without a medial post or any other structural supports, the Clifton is built for a neutral runner with a higher arch. However, it has a wider footprint than most shoes, which naturally stabilizes the stride to a certain extent. Its low 5 mm heel-to-toe drop will feel unusual to a runner accustomed to a more standard drop, but it provides a more natural feel despite the shoe’s thick cushion that can be beneficial for runners with knee or hip problems. And its roomy toe box remains comfortable for even the longest training runs.

Cons: That 5 mm drop may work well for runners with knee problems, but could be problematic for runners with Achille’s tendonitis or overly tight calves since the low drop requires additional flexion from the ankle and calf.

The soft, thick sole tends to wear quickly, which both reduces the cushioned feel and means more frequent replacements, and its layered mesh upper traps a lot of heat.

With its softer ride, the Clifton isn’t the shoe to wear to break a PR or race shorter distances. 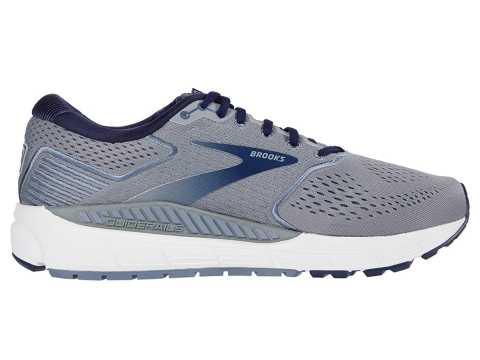 Pros: Brooks fans have been devoted to the company’s shoes for decades, and fans of the Beast and Ariel (the shoe’s women’s version) are no exception. This shoe combines durability and heft with the plushness of Brooks’ BioMoGo DNA midsole, resulting in a cushioned ride well suited for taller and heavier men. Its segmented crash pad system helps to distribute force and smooth the stride.

The Beast is a true motion control shoe suitable for serious overpronators, though it does not have medial posts. Instead, it uses Brooks’ GuideRails system of raised strips, which are keep your foot from rolling but otherwise won’t interfere with your stride. With excellent arch support, they are a good choice for flat-footed runners, and their 12 mm drop makes them suitable for heel strikers and relieves pressure on the foot, ankle, and calf. A roomy toe box increases comfort while putting in the miles. Combined, these features create a supportive and comfortable shoe for runners with plantar fasciitis, Achilles tendonitis, or other foot or calf problems.

Cons: Weighing in at a whopping 11.7 ounces, Beast is a far cry from a racing shoe. While it’s an excellent training shoe for runners who need its stability and cushion—most will find that it provides a significantly slower ride than lighter, more responsive shoes.

The shoe’s 12 mm drop makes it a good choice for runners with foot and calf problems, but redistributes force to the hips and knee. Runners with chronic injuries in these areas may want a shoe with a lower drop.

Conclusion: Both the Brooks Beast and Hoka One One Clifton offer a well-cushioned ride for runners looking to put in long miles. However, significant differences between the designs of the two shoes mean that their suitability to a particular runner will likely come down to anatomy. The Clifton, with its low drop and lack of stability features, meets the needs of a runner with a high arch, a midfoot strike, and a neutral stride, and for runners prone to knee or hip injuries. It also remains fairly light considering the level of cushion. The Beast, on the other hand, is best suited for a runner with flat feet, a heel strike, and moderate to severe overpronation. It’s also a better choice for larger, heavier runners, since its heft provides more support. The good news is that both are excellent, quality shoes. And whichever one you choose, you can find it right here at Shoekicker.